The waiting time to a kidney transplant has dropped by 18% over the past five years, NHS Blood and Transplant has announced to mark World Kidney Day, Thursday March 9.

The news comes as the number of people on the NHS Organ Donor Register has reached its highest ever figure, 23.53million. Last year, 2015/2016, the UK also had the highest ever number of deceased organ donors,

“However there is a still a severe shortage of donated organs. Two and a half years is far too long to wait for a kidney and far too many people die without ever receiving the transplant they need. Organ donation saves lives and we urge people to join the NHS Organ Donor Register and talk to their families about their decision.” 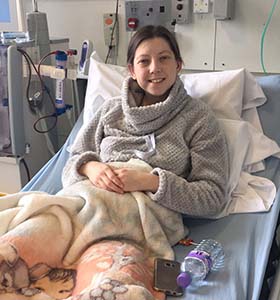 Jade Carr, 23, from Widnes in Cheshire, has spent four years in need of a kidney transplant. Her poor health means she is not currently on the waiting list because she would be unlikely to recover from the operation.

Jade had a heart transplant as a three-year-old and went on to win medals in the World Transplant Games but her immunosuppressants have damaged her kidney function. She is now seriously ill and largely housebound.

Jade said: “A transplant would give me back that chance at life, and some kind of normality. I am out of hope with family members being able to donate to me. My mum can’t because of her heart condition and my dad isn’t a match for my blood group.

“You can be someone’s hero by becoming a donor, either by donating in death or by donating a kidney while you still alive.”

Jamie Madden, a mechanic and electrician from Sandhurst in Berkshire died in June 2015 aged 32 and was able to donate his kidneys. He was working on a friend’s car when the axle stand gave way and the car collapsed on him.

His wife Hannah found Jamie under the car on their driveway.

“I was just faced with the shock of losing my husband, and my initial thought was ‘you are not touching him’,” said Hannah, 35, a childminder.

“But my husband was incredibly giving. And after speaking to his mum and dad and after thinking about it we decided to donate.”

After the donation, Hannah and her two children received letters telling them Jamie’s kidneys had been successfully transplanted.

“When I got the letter, I started crying. I was very proud because Jamie lives on in somebody else.”

Diljit Kaur Sambhi, 60, from Darlington, had a kidney transplant in 2013. She first started feeling ill when she began constantly vomiting a green fluid. Doctors think her kidney failure was probably down to an infection combined with undiagnosed diabetes.

Her daughter Am Sambhi, 34, said: “We knew we might never receive that phone call. Finding a match can be difficult and being from an ethnic group makes it more difficult.

“It was truly unbelievable to get the call at 5am for the transplant and that moment will stay with me forever.

“Before we left for the hospital we went to our temple, the Gudwara, to give thanks for this amazing miracle. No words can describe the difference my mum’s donor has made to all of our lives.

“We thank them and say a prayer for them every day.”