Professionals and volunteers recognised in organ donation and transplantation awards

Outstanding professionals and volunteers in the field of organ donation and transplantation from across the UK have been honoured in the first awards of their kind.

The winners of the new UK Awards for Excellence in Organ Donation and Transplantation were announced before a 600-strong audience at the NHS Blood and Transplant and British Transplant Society joint congress at the Harrogate Convention Centre. 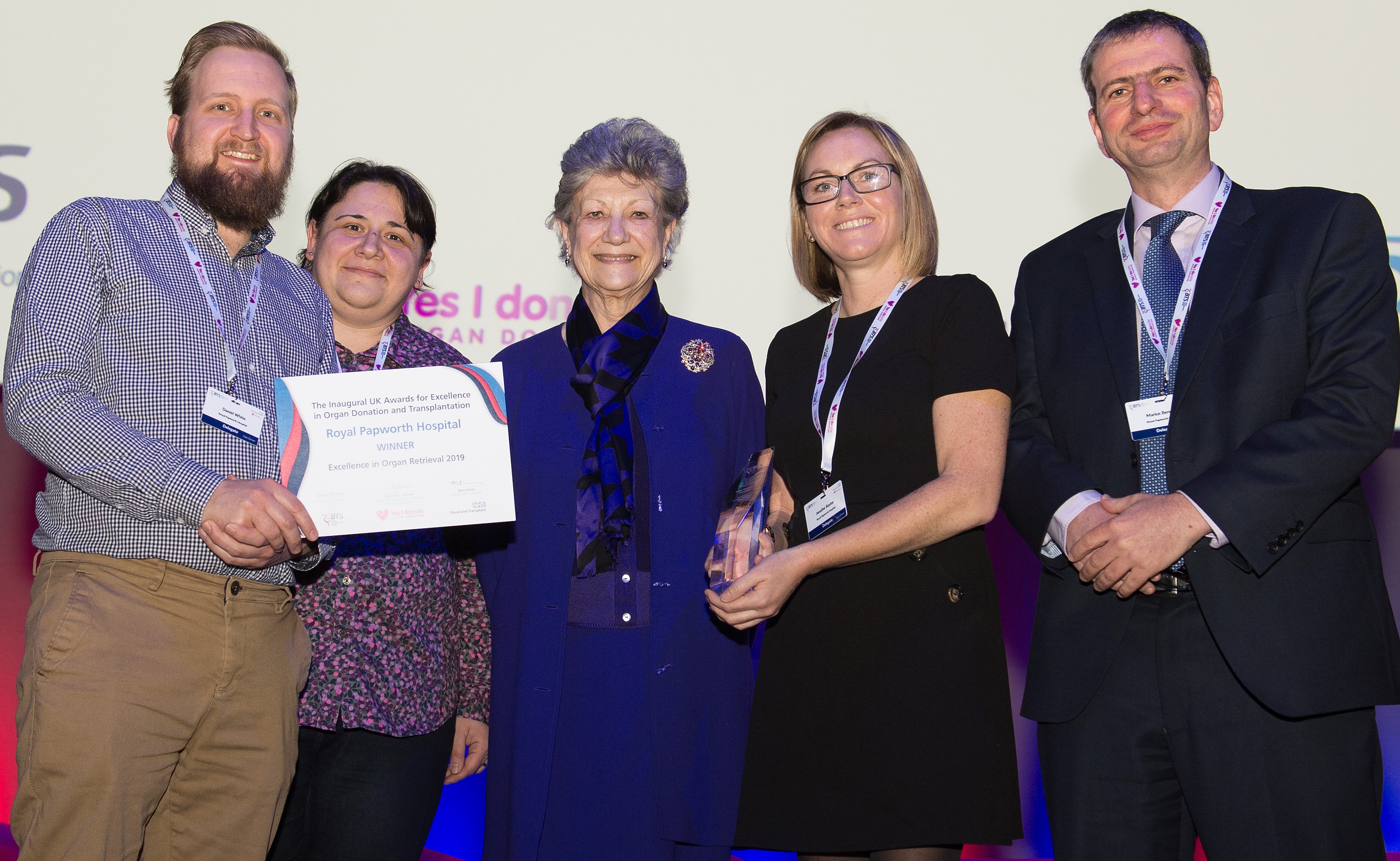 The two organisations launched the awards to recognise individuals and teams making an exceptional contribution, in paid and voluntary roles, to saving and improving lives. Nominations were invited from across the organ donation and transplantation community.

The Royal Papworth Hospital (staff pictured) was awarded Excellence in Organ Retrieval, an award which also recognises the entire hospital staff. Papworth was nominated in recognition of their world-leading innovative heart transplantation programme and for performing a record-breaking five transplants in 36 hours.

The living kidney donor team at Belfast Health and Social Care Trust, led by Dr Aisling Courtney, were named winners of the Excellence in Transplantation Performance award in honour of their success in revolutionising Belfast’s living donation programme, a leader in the UK.

Campaigners Jay and Sina Patel were named Exceptional Volunteers for their ‘outstanding’ contribution to raising awareness of organ donation in memory of their three-year-old son Aari, who died and donated his organs, saving the lives of two children. Read more about Jay and Sina's story here.

The Excellence in Delivering Patient Care award went to Melinda Poh Chuo Yii, sister-in-charge of liver transplant theatre at King’s College Hospital, for her ‘instrumental’ role in leading the theatre service since its inception and her dedication to an incredibly busy team.

The Excellence in Innovation and Research award went to Gavin Pettigrew (pictured) at the University of Cambridge for his research, set up across every kidney transplant centre in the UK, testing the need for a biopsy in kidney transplantation and supporting the use of perceived ‘higher-risk’ organs.

The NHS Blood and Transplant North West team of Specialist Nurses won the Exceptional Organ Donation Services Team award in recognition of their commitment to ‘consistently go above and beyond’ and provide the highest standards of care to donors and their families.

Dr Paul Glover was named Exceptional Clinical Lead for Organ Donation for his work in Northern Ireland to steer a change in organ donation from an unusual event to a routine part of end of life care offered to patients and their families.

Olive McGowan and her team at NHS Blood and Transplant (pictured) received the Excellence in Education award in recognition of the approach to learning and education that Olive has embedded, both within her teams and the wider organ donation community.

“With the British Transplant Society, we launched these awards to celebrate the vital lifesaving work happening every day across the field of organ donation and transplantation, and shine a spotlight on those exceptional individuals and teams whose efforts are often unseen.

“It is fitting that we share their successes at our joint congress and provide inspiration to people across our community as we continue to strive to increase donation and transplant rates and save more lives.”

Lorna Marson, President of the British Transplant Society, said: “We are delighted there has been such a big response to the new UK Awards for Excellence in Organ Donation and Transplantation, and I congratulate all members of transplant and donation teams who were nominated, commended and of course, the prize winners.

“These awards have been set up to acknowledge the huge amount of work that goes on every day in organ donation and transplantation, particularly by ‘unsung heroes’ who deliver excellence in all areas of the service. We in the UK are very proud of the service we provide for transplant patients, while always striving to improve their experience and outcomes.”

A total of 185 nominations were received across the organ donation and transplantation pathway. The winners and highly commended nominees were selected by a judging panel of clinicians representing NHS Blood and Transplant, the British Transplant Society and the Intensive Care Society, and representatives from nursing, The Donor Family Network, patients and lay representatives.

Below is a list of winners and a summary of their nominations, and the highly commended nominees in each category.

By sharing the story of Aari, their three-year-old son who died and donated his organs, Jay and Sina have made an outstanding contribution to raising awareness of organ donation. They fronted a Government campaign led by NHS Blood and Transplant to address the shortage of black, Asian and minority ethnic donors, and are members of the steering group of the campaign’s Community Investment Scheme.

They volunteer in the NHS Blood and Transplant Organ Donation Ambassador Programme and take part in awareness activities including events within the Hindu community. Jay and Sina have raised significant amounts of money for charity in Aari’s memory and created a video with NHS Blood and Transplant that is used to support staff training at St George’s Hospital.

“At a time of grief and loss, Sina and Jay chose to share their story of Aari and the reason for their decision to donate his organs. In a short amount of time they have achieved much, however continue to campaign with Aari in mind in multiple ways to raise awareness of organ donation on a voluntary basis.”

A hard-working team demonstrating flexibility, commitment and innovation. They are always ready to try new ways of working and have led on several initiatives that have gone on to be adopted nationally, for example, the specialist requester role which they piloted with a neighbouring team.

Despite being one of the busiest teams in the country, each team member acts with professionalism, compassion and humanity when caring for donors and their families. The team has consistently high donor numbers, achieving the highest number of proceeding donors in 2017/18.

“A dedicated, caring and passionate team of specialist nurses who are always willing to go above and beyond to provide the highest possible standard of service for the donors, their families and the local hospitals and staff.”

Over the last eight years there have been 99 organ donors, leading to 232 organs being transplanted, saving and improving the lives of 211 people. In addition, Dr Glover has provided invaluable advice and guidance to the Chief Medical Officer and senior officials in the NI Department of Health.

A dedicated team of specialist consultant physicians, surgeons and nursing and supportive staff providing lifelong care for transplant recipients and their families. As world leaders in DCD heart transplantation, their revolutionary programme has led to a 40 percent increase in the number of heart transplants and has been rolled out to other units around the UK.

The first DCD heart transplants in Belgium have taken place using the Papworth technique and other countries are now starting programmes. Furthermore, in 2018 five patients underwent lifesaving transplant operations within a 36-hour period, between them receiving two hearts, two sets of lungs and one single lung. Completing this number of transplant operations within such a short window of time is thought to be a national record.

“This goes to show how Royal Papworth Hospital has a long and distinguished history of pushing boundaries, introducing new technologies and techniques and consistently being at the forefront of cardiothoracic transplantation.”

Highly commended: Elijah Ablorsu for leading the creation of an Independent Cardiff National Organ Retrieval Team; Mohamed Morsy in recognition of his work at King’s, St George’s and currently Leicester.

Dr Aisling Courtney and her team have revolutionised the schedule, programme and outcomes of the living donation programme in Belfast. Over the last eight years they have developed the programme to the extent that the living donor transplant rate now exceeds the yearly deceased donor rate.

“We believe the step-change made by Belfast is a credit not only to the visionary and passionate leadership of Dr Aisling Courtney, but also the determination, commitment and passion of the entire team to provide the best treatment option for their patients.

Melinda has led the liver transplant theatre service as the sister-in-charge for over 20 years, since its inception. It is now regarded as one of the finest liver units in the world, having performed almost 6,000 liver transplants.

She has been instrumental in her role as theatre leader when the centre carried out pioneering operations such as the first paediatric, living related, split liver, domino, in-situ split liver transplants, and using livers from donors after circulatory death. She has exceptional leadership and communication skills and runs the service with discipline and a ‘rigorous approach’.

Her overall qualities as a senior theatre nurse in charge of the liver unit has earned her an international reputation and she now shares her wealth of experience in the International Nursing Faculty.

“Sister Yii is very well respected by not only the consultant surgeons but by all medical staff and managers, as they know behind the ever-smiling face is a person who is ruthlessly efficient and is one of the cornerstones of the unit, whose devotion makes her a person ‘par excellence’.”

Excellence in Innovation and Research

Winner: Gavin Pettigrew at the University of Cambridge for organ utilisation

Gavin is an honorary consultant transplant surgeon at Addenbrooke’s Hospital and a reader in transplant surgery at the University of Cambridge. Throughout his research and clinical career he has had a focus on organ utilisation issues, especially in the use of higher risk DCD liver, kidney and pancreas transplants.

“Gavin’s willingness to challenge existing thinking and ‘push the boundaries’, and his commitment to providing evidence, have enthused and inspired new generations of UK transplant surgeons. This should stand UK transplantation in good stead for many years to come.”

Olive has led from the front in creating an investigative culture within the organ donation directorate of NHS Blood and Transplant, which focuses on learning from incidents in a supportive environment but still retains accountability where appropriate.

The learning and education approach that she has developed within her team and the wider organ donation community within NHS Blood and Transplant and beyond, allows lessons to be incorporated into practice to prevent as far as possible the same mistakes being repeated in the future.

“With her leadership approach and style, Olive has created an environment where the expectation is learning from an incident rather than blame. She never gives up in her fight to find answers and solutions following an incident. She continues to strive to make organ donation and transplantation as safe as it can be.”

The NHSBT Organ Donation and Transplantation and British Transplantation Society joint congress is taking place at the Harrogate Convention Centre from March 6-8. Based around the theme of communication, the three-day event aims to unite clinicians, surgeons, laboratory scientists, nurses, transplant coordinators, volunteers and others interested in organ donation and transplantation.

About NHS Blood and Transplant