This year, with the World Transplant Games having taken place in Newcastle and Gateshead, Newcastle-born retired footballer and TV pundit Alan Shearer seized the opportunity to tell the story of a number of athletes whose lives have been transformed by organ transplantation in a documentary produced for the BBC. The documentary is available on BBC iPlayer until 1pm on Monday 7 October.

Amongst the inspirational stories told in the 30 minute programme is that of Makena, who was born with hypoplastic left heart syndrome; a condition in which the left ventricle and main blood vessel of the heart do not develop properly, leaving the heart unable to pump blood effectively. Makena’s condition was picked up at antenatal scans before she was born. Mum Tracey recalls: 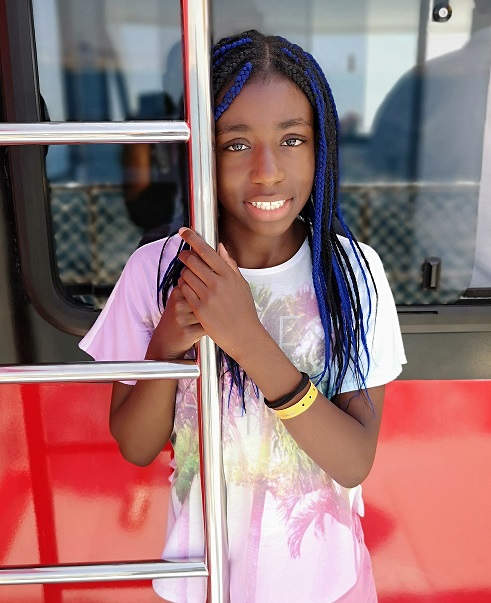 “It was a shock being told my unborn child had a heart condition and it was a very worrying time waiting for her to be born but we knew what was to come and were prepared for it. We were told Makena would need surgery very early on, possibly at only a few days old.”

Makena’s first surgery took place when she was just five days old, and follow up procedures were planned for when Makena was 9 months old and another before she was to start school. Thankfully all went well and Makena was fine to start school in September 2012. Sadly, just a few months after starting school Makena started to go into heart failure.

Following a cardiac arrest, it was decided that Makena was in urgent need of a heart transplant and her name was moved onto the priority list. After a tense wait, a heart was found. She had some complications post-surgery but did well and was allowed back home. Sadly, Makena was later diagnosed with post-transplant lymphoma and pneumonia. Mum Tracey reflects:

“It has been such a tough time and so hard to witness Makena face another battle but she is a really happy go lucky child and has taken everything on the chin. She is a real fighter and missed a lot of time from school but now she is 11 and is doing really well.”

After her recovery Makena was invited to take part in the British Transplant Games and in 2019 she represented Team GB at the World Transplant Games, as well as starting secondary school in the September.

“It has been a busy few months but we couldn’t be more proud." Says Tracey. "I was emotional thinking of her at secondary school and reflecting back over every obstacle she has faced but I love watching Makena make plans and flourish at school.

“We are so grateful to the family who said yes to organ donation. We know Makena’s heart came from a young woman and we thank her every day for giving Makena the gift of life. As parents nothing we could give Makena could ever match the gift this woman gave and we hope to honour her memory by raising awareness and encouraging more people to understand just how important organ donation is.”