The number of people spending Christmas on the heart transplant waiting list is 24% higher than it was last Christmas.

There are currently 298 people on the waiting list for a heart transplant compared to 240 people at the same time last year1. This includes 33 children who will spend the Christmas period seriously ill and waiting for a call that may never come.

NHS Blood and Transplant is urging people to tell their families they wish to donate to help with the deadly shortage of organs.

The Department of Health recently launched a consultation into an ‘opt out’ system of organ donation for England. Under the proposed system, you would be a donor unless you don’t want to donate.

Sally Johnson, NHS Blood and Transplant Director of Organ Donation and Transplantation said: “Hundreds of people are spending Christmas waiting for a call that might never come. Their families will be spending the festive period living with fear and uncertainty.

“We desperately need more people to agree to donation to help with the number of people waiting for hearts and organs of every kind.

“Whatever the outcome of the Opt Out consultation, if you support organ donation, please act today.

“Tell your family you want to donate and join the NHS Organ Donor Register.”

“The transformation is quite miraculous. On average, a heart transplant recipient can expect to live for another 14 years; the lucky ones could even get 25 or 30 extra years.

“A lot of people who could donate do not discuss their wish to be an organ donor with families and friends. When they die, their organs simply go to waste.”

Health Minister, Jackie Doyle-Price said: “Organ donation is a selfless gift which can transform someone’s life. This government is committed to transforming the way organ donation works but if we are to save lives, it is also vital that everyone talks to their loved ones about their wishes.”

Jim Lynskey, 22, from Birmingham needs a heart transplant and had a LVAD (Left Ventricular Assist Device) heart pump fitted as a bridge to surgery.

However his pump failed in October - he was told by his doctors he was the first person in the UK to have a sudden LVAD failure.

Jim was studying at Sheffield Hallam University when the alarm sounded on his pump. He had an urgent 12 hour operation to fit a second LVAD.

Jim said: “I heard and felt the pump switch off and I thought ‘this is not good’. It was shocking because you never expect it to happen.

“After the shock wore off I started to feel dizzy and sick, just like I was going to pass out. I called for my friend around the corner to get an ambulance.”

Jim spent his 22nd birthday recovering from surgery and he’s temporarily off the waiting list while he recovers. Jim had a meningitis virus infection in his heart when he was a child which caused his heart to fail.

He said: “I can’t receive a transplant this Christmas but there are around 300 people on the heart transplant waiting list who desperately need that ultimate gift. I really want everyone to tell their families: ‘I want to save lives by donating’.

“It’s hard to think about a transplant for myself at the moment because I know it would be a massive operation and I feel it would be the final throw of the dice in a way.

“I was told I’d have around three years with the LVAD before I got a transplant and it’s now three years later and to be getting another LVAD instead of a heart is pretty gutting.”

Aaron Mellis, 29, an offshore worker from Thornaby in County Durham, suffered sudden heart failure from sarcoidosis, a rare and incurable disease that causes swollen lumps to develop within the affected organ.

He had no symptoms at all until one day when he was in the back of a friend’s car, and he found he could hardly breathe. He was rushed to hospital where his heart found to be twice the size it should be.

Aaron suffered a huge stroke which temporarily paralysed him and left him unable to speak. He went on to have major surgery to clear the blockages but his health continued to deteriorate and his weight dropped from 13 stone to 9 stone.

Aaron went through more than 20 trips to A&E and a false alarm for a heart transplant.

The lowest point came when he went into intensive care with less than 2% heart function, was in a coma for eight days, and needed treatment on an ECMO, which uses an artificial lung to oxygenate blood outside of the body.

His girlfriend Amber Hagan, 27, a mental health professional, said: “Just looking at the huge machine and pipes in his legs was traumatic.”

Aaron went on to have more surgery to fit an LVAD (Left Ventricular Assist Device).

Today, Aaron’s speech is limited and his mobility is limited by the battery life on his LVAD, but he physically more able than he has been in two years.

Amber and Aaron met in Ibiza and they live together with their pet dog.

Amber said: “I am terrified of the future of anything going wrong, of him getting the heart and the hours in the operation, of losing him young, of not being able to get married – of a lot of things, which is not a nice feeling to carry round.

“I’m more grateful now than ever about my friends and family who have stuck by me though it all.

“Getting a transplant at Christmas, and being able to get our lives back to how they were, would be an incredible gift.

“For people who do not support donation, I would say go to an intensive care unit where people and children who are otherwise fully healthy apart from one organ are lay dying, while people are cremated with healthy organs burnt inside them.” 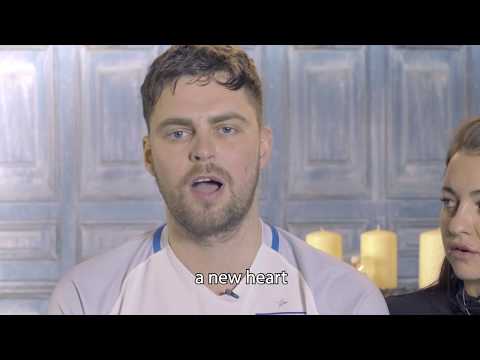 The 50th anniversary of the UK’s first heart transplant is in May.

Nearly 7,000 people are recorded as having received heart transplants in the UK since the first operation, though the historical data is not complete.

Heart transplants are still uncommon, with around 200 operations a year.